I've been working on little things, now that its running and keep finding more & more issues that need to be addressed. I did get the gauges mostly installed (didn't hook up the volt gauge) but was more concerned with the oil pressure and engine temp gauges. I was able to fire it up and get the coolant up to temp watching it rise, let the thermostat open & close and continue burning off paint, oil, etc. I installed a 185* thermostat and even without a radiator fan currently installed, it idled at a constant 185-190*'s. I'll add a decent fan and shroud in the near future.

I rolled it out of the shop and let it run for a good 10-15 min, checking timing, adjusting the carb, etc. The oil pressure cold was between 30-35 PSI and after warming up dropped to 15-20 PSI at idle.... but I'm running it thin, with a quart of ATF and a bit of Marvel Mystery Oil to help clean out the internals. I'll change the oil again soon and put the right weight in. I'm just glad the oil pump is healthy and working well.

The fuel pump was leaking gas at the output while it was running. Fixed that... then noticed the newly installed oil pressure gauge was leaking at the fitting. It was tight, but I think I need a little teflon tape on it. The coolant temp sensor in the head had to be adapted and it was dripping too... I think I can relocate it to the intake manifold and bypass the need for an adapter in the Vortec heads. Then I realized the throttle blades are hitting the intake manifold, the blades hang up on the manifold at one point and it was idling pretty high. I'll add an open plenum adapter between the carb and intake and make sure the blades don't hang up.

Lot of little things to tweak, but I'm glad its running well and sounding so healthy... it's still open headers and it sounds so badass. I did receive part of the exhaust system, a 2.5" crossover from Summit Racing, waiting on a pair of 40 Series Flowmaster mufflers that I'm hoping to have soon, so I can run it more often without pissing of the neighbors.

Made a better video of firing it up and running, off camera I spent time adjusting the timing, carb, burping the radiator, etc. I love how this thing sounds at idle with open headers, I think the big bump in compression from the Vortec heads makes it sound nasty! It went from 9 to 1 to 10 to 1... time for 91 octane! That has to be one of my favorite sounds.

This truck is turning out quite well, next step after the engine tweaks is to get the brakes working and get it on the road! I can't wait to drive it.

You keep mentioning it's a stock cam....but it sounds pretty rowdy. You sure it's stock?

I Lean said:
You keep mentioning it's a stock cam....but it sounds pretty rowdy. You sure it's stock?
Click to expand...

I have no idea what was done to it 40+ years ago, far as I know it's stock.... but I agree, it might not be? Hard to say... I really think the rowdyness is just from the open headers. We will see if it calms down after the exhaust goes on.

I don't want to hijack this thread, since it's about the '70 C10.... but I mentioned the '63 Chevy II four door that my wife claimed, early on. Yesterday we were able to bring it home, figured I'd share an update. Catherine will be deciding on the paint color, seats, interior materials and color and I'll be taking care of the mechanicals. The plans are to make it a nice little cruiser, fun and easy to drive. She wanted a 4 door, so she can pile her friends into it and cruise around, probably visiting the local winery's. 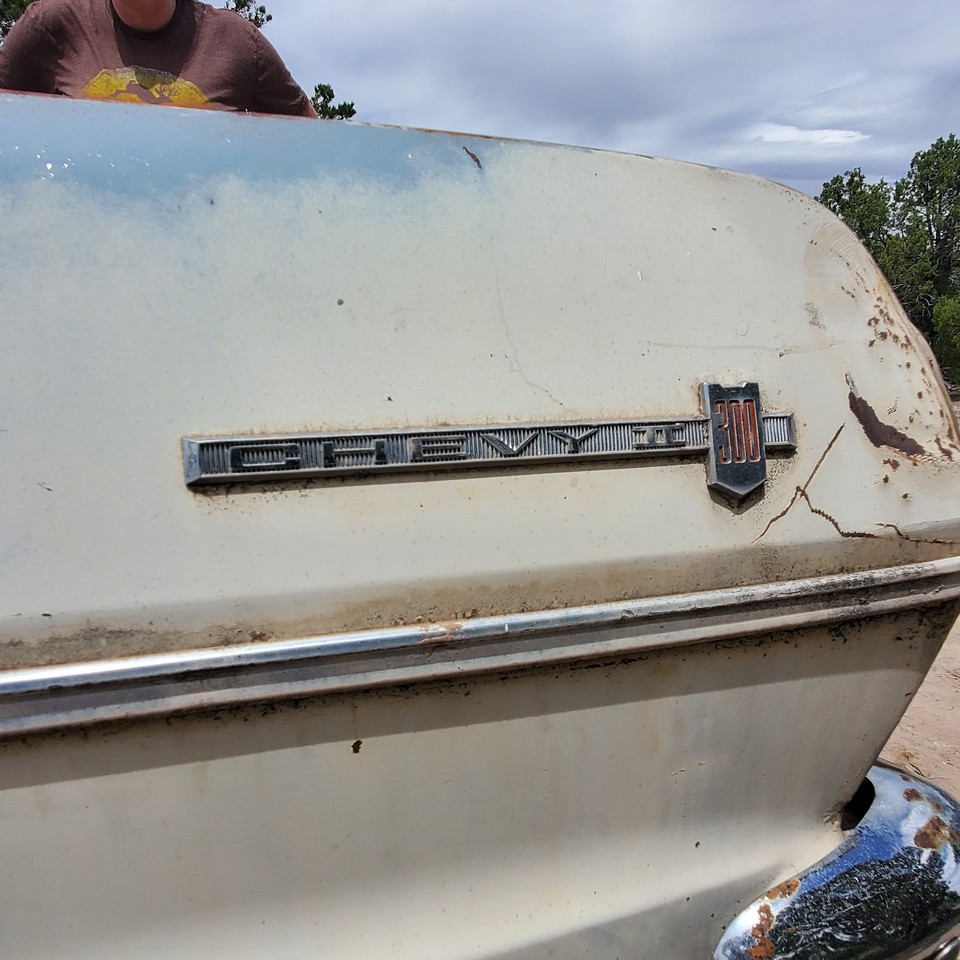 It has a straight six under the hood (194 cu in, 120 HP & 177 ft/lbs) and a manual, three on the tree transmission. It sounds like the trans isn't functional though, I want to try get it driving with the original drivetrain. The PO mentioned that it was parked because the transmission would jump out of gear. It happened a few times, then the final straw was when it rolled out of control, with kids in the back seat. Nothing serious happened, but it scared the family enough to park the car. It looks pretty straight, but has rust around the rear wheel wells. The interior is trashed, lots of seeds and pack rat shit, headliner falling off.

After getting it home, we pressure washed it, then got the shop vac and filled it 3 times, cleaning out all the junk inside. I decided I wanted to pull the carpet (it had some shag, house carpet inside it!) and the seats and pressure wash the interior. Once the carpet was out, I realized the floor was shot, rusted completely thru in places. I priced out full floor pans, looks like they run around $400-500.

I have some ideas in mind for future work, the front ends on these can be pretty questionable. A Mustang II front end is a pretty common upgrade and not too spendy. These Chevy II's have a subframe on the front and you can actually buy a bolt-on front frame setup for Mustang II parts, upgrading to a rack & pinion. Disc brakes all the way around would add safety and a Ford 9" out back would be a nice upgrade. I really like the idea of swapping in a GM EcoTec... the 2.5l LCV that comes in the 2015-19 Chevy Colorado, running the Colorado 5 speed manual trans out of a 2WD truck would be amazing. The LCV makes 200 HP and 191 ft/lbs, with a simple turbo it could easily reach near 300 HP... not that it's needed.

It'll go into storage for awhile, until some other projects get done. Now, back to the C10....

Spent the last 2 days working on the C10, put 5 gallons of 91 octane in the cleaned and sealed tank finally, finished up the exhaust, flushed the cooling system, changed the oil again (after a cleaning flush), bolted on the radiator fan, connected the alternator, etc, etc.

Fired up the truck today with the exhaust and it sounds great, not too loud, not too quiet. Compared to how it sounded with open headers, it's so much more mild. I dumped the mufflers right before the rear axle, it sounds streetable for sure.

I let the truck idle in the shop after installing the flex fan, it pulls a LOT of air. The temp gauge stayed at a steady 180* over a good half hour of idling with no additional air flow. I'm good with that, 180* is nice and cool and gives plenty of room if it does get warm.

I did pick up a TH350 auto with a convertor today, the trans was supposedly rebuilt awhile ago. I'll hang on to it, it may go in in the future or just go with the truck when it sells.

Awesome Greg. Your going to make someone very happy with that truck.

kmboren said:
Awesome Greg. Your going to make someone very happy with that truck.
Click to expand...

This would be where I usually decide to just keep them...lol

kmboren said:
Awesome Greg. Your going to make someone very happy with that truck.
Click to expand...

I hope so, it's been a fun project!


NYCEGUY01 said:
This would be where I usually decide to just keep them...lol
Click to expand...

I wanted to make more progress this weekend, but it just didn't happen.... that said, I did remove the rear bumper and replace it with a roll pan, painted in Red Oxide primer. It looks so much cleaner and really matches the truck. We will see if I decide to try to match the blue that is prevalent on the rear of the truck. I used the plasma cutter to remove the bumper, since it was welded on... took all of 3 minutes to blow it right off!

I started on the brakes, ordered new shoes all the way around, new wheel cylinders, new master cyl, etc. I pulled all 4 corners apart and went to pick up my parts after making my first online order from O'Rileys.... and they effed it up! My brake shoes are the same part # front & back, so I ordered 2 sets of the same part#. Well, some smart fella at the local O'Rileys assumed I screwed up and meant to only ordered one, so I'm waiting for another set of shoes. Last time I'll order online from them! One of the shoe linings fell right out, when I pulled the drum off!

Spray a couple white and yellow patches on that roll pan, then cover it in a blue that's close... Then back it over a chain link fence to distress it.

I've been working on wrapping up the brakes and a lot of little things, but made some big progress today!

Once the brakes were functional, it was time for a drive! I double checked the brakes, they seems quite good. Had to adjust the idle in the street, then went for a cruise around the neighborhood!

Yeah, you're not going to sell it.

UNSTUCK said:
Yeah, you're not going to sell it.
Click to expand...

I was getting ready to start the listing last night.

Greg is not in love with any of his cool rides. We have seen it time and time again.

Looking good. Hopefully you make a quick sale and good profit on it. Looks like the toy market is quickly drying up from buyers though. Economic pressures from inflation, gas, food, etc. are going to do that. I watch the antique car market, and there has been a surge of new listings over the last couple of weeks.

Mouse said:
Looking good. Hopefully you make a quick sale and good profit on it. Looks like the toy market is quickly drying up from buyers though. Economic pressures from inflation, gas, food, etc. are going to do that. I watch the antique car market, and there has been a surge of new listings over the last couple of weeks.
Click to expand...

I'm not surprised, things are changing a little too quickly. At this point I'm into it a decent amount, I may not make as much as I had initially hoped, but a little would be better than nothing.

I've been driving the C10 around the neighborhood, getting to know the truck and realized I was pretty low on gas. It's still not registered, brake lights and blinkers aren't functional but I needed to fill the tank.

I decided to run to the local gas station less than a 1/2 mile away, which is on a 45 MPH road. My seat still isn't bolted down (working on finding the right bench seat), but this was a good opportunity to get it into 4th gear and up to speed. I filled the tank with 91 octane for the compression bump, then hit the road headed home. I opened the truck up to 3/4 throttle in 2nd gear and 3rd gear... and it SCOOTS!! The engine mods really help the 350 breathe, it's not *fast* but it's not slow either... and it sounds awesome. Probably got it up to 55 MPH and it's sporty, fun to drive and turns heads. I got a wave from another older Chevy truck driver!

Still working on some small things, but it's coming along and very fun to drive. I still super impressed with how well it drives and rides with 22's and lowered suspension. It's going to be a great sport truck for someone.

I have that same hood gap. Your bumper is straighter than mine, though.