I Love The '80s, -OR- we induct a friend into the Roadkill lifestyle

I Lean said:
Well, except for the whole posting-on-the-internet part of it.
Click to expand...

I only mentioned this on two internet forums, and she isn't aware of either of them. As long as all you guys keep quiet, we're good.


Kiel said:
I wont lie, between the smiles and the ghetto jack stands, I love it
Click to expand...

Dude, Mike got those ramps from someone via a KSL ad. That guy made them at home, and they each weigh a ton. They're huge, they're bulky, and they take two people to properly move across the yard without suffering a back injury... but, damn, they sure do a good job of holding up a car.

I just read thos entire thread. Not sure how I missed it. Way cool.

Today was our appointment at the exhaust shop. Ryan bought the same header-back Pypes kit that I have under my Grand Prix (3" mandrel, x-pipe, RacePro straight-through mufflers) and we are having it assembled at the shop.

To get ready for this event, Monday morning the three of us met at the car to try and wire in the oil pressure and coolant temp gauge sending units, then start the engine and just let it run for 20 minutes or so to finish baking the paint on/off the headers. I found the coolant temp unit which we removed from the 307, but its diameter was too small to fit in the Edelbrock intake. We found an adapter bushing in Mike's shed which solved half of our problem--the bushing's outer thread fit the intake--but we had to drill and tap the inside to fit the sending unit. Eventually, it all went together. Good.

I looked everywhere for the oil pressure sending unit. I distinctly remember taking it off the 307, too... but I couldn't find it anywhere. So we went through Mike's shed and eventually found one sitting around. Yay! We all remembered that Ryan's 454 has a broken-off sending unit still installed in the port (which is at the rear, in the V, between the intake manifold and the transmission) and we had left it there all this time to keep crud from getting into the oil galley. Now we just needed to remove it. This ended up being impossible, as the BOP transmission bolt pattern has a bolt boss that sticks up right next to where the sending unit sits... and it is firmly contacting the unit, so we can't put a socket on it to remove it. Oh, well--we'll deal with that later. For now, let's just run the engine as planned.

The car wouldn't start. It would crank fine and occasionally sputter one or two combustions, but it would not run. Since we had removed the distributor cap while trying to remove the oil sending unit, I was convinced we had somehow jacked it up. But no matter how we fiddled with the distributor or its cap, we could not get the car to start. What the hell?!? We soon ran out of time (we all had to go to work), so we just closed the hood and walked away.


That brings us to this morning. It was hella cold (like 25^ F). The exhaust shop is only half a mile from Mike's place, so we decided we would just drive the wagon there--open headers and all--if we could get it to start. No luck--it just sputtered. (grrr) Mike pointed out that the carburetor we installed has no choke on it at all, so this could be the reason for not starting. Whatever--the engine doesn't need to run to install an exhaust system. I grabbed my strap and towed Ryan there with my Suburban.

In that parking lot, a took a photo of my gift decals which Ryan recently installed. I love them. 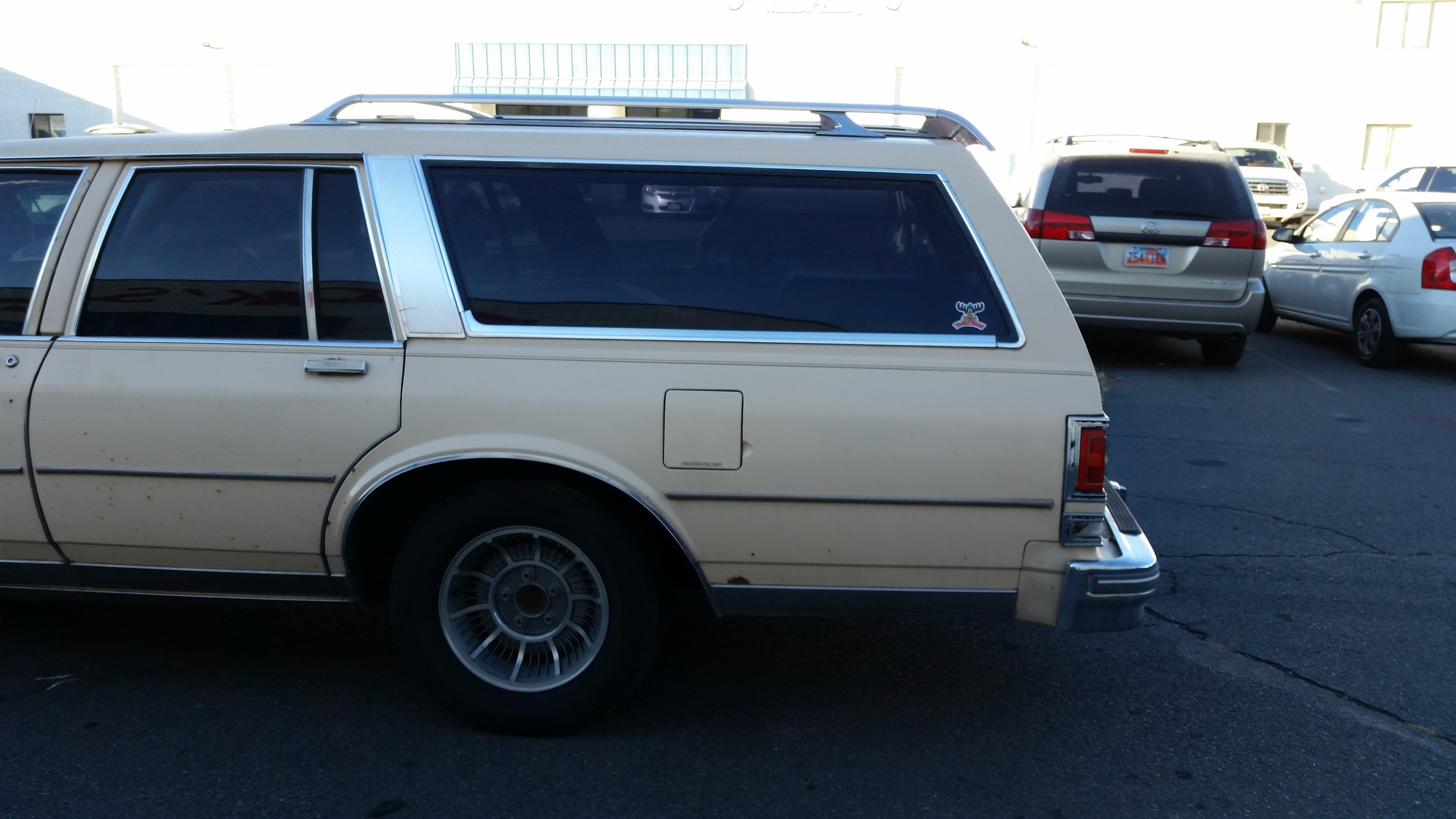 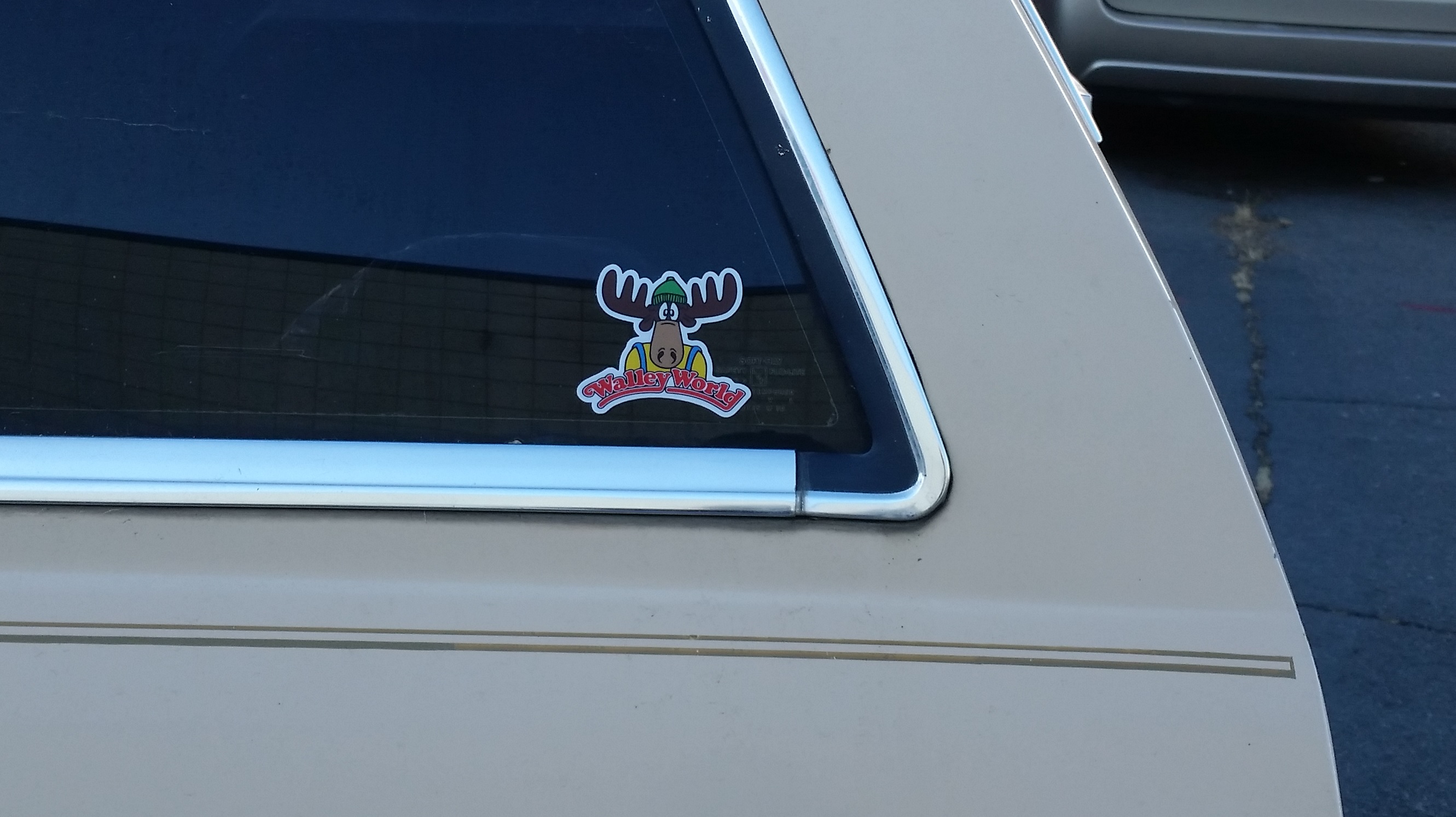 When it was finished this afternoon, Ryan and I returned to the exhaust shop and, without bothering to try to get it to start, towed it back to Mike's place. When we got there, I parked on the street so as to unhook my strap, then I moved the Suburban out of the way so we could push the wagon back into Mike's yard. Standing next to the car, Ryan joked and said, "should I try to start it?" Sure, why not?

He hopped in, hit the key, and I'll be damned if the thing didn't immediately come to life.

Gee, maybe Mike was on to something about the carburetor. This was pretty much confirmed when the car very quickly began revving down until it stalled. Ryan got back in, restarted it, and had to keep a foot on the throttle to keep it running. But it was running! And now it has a full exhaust system under it, which means we could drive it on the street.

As luck would have it, we pulled out right next to a state trooper... so no hoonage for us. But that's okay--it is a new engine, after all. Being the maiden voyage, we did not want to go far. For our first destination, we just went down the block, around the corner, and pulled in to a gas station for Baby's First Fillup. 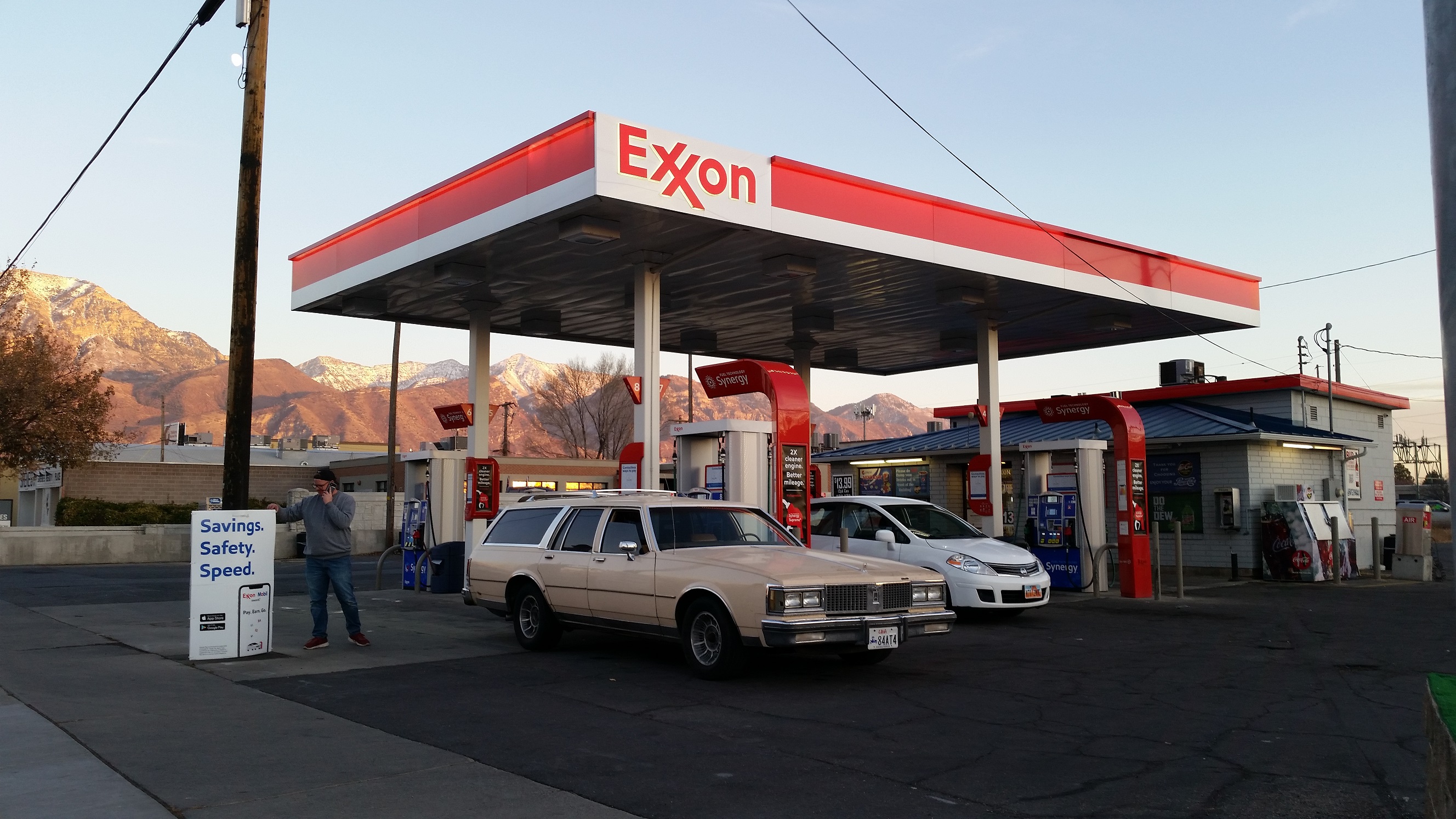 From there, we just kept driving around the block. We mostly stayed on side streets, and we kept circling Mike's house so it would be a short walk in case of a breakdown. And while it didn't quite break down completely, this was the car's first drive... so guess what did happen?

I was glad we installed the coolant temp sending unit, and it was working perfectly. As we kept driving, the temp needle slowly crept higher and higher. At 220^, I told Ryan to start watching it closely. At 230^, I said we should get back home pronto. By the time we got back to Mike's place, it was up near 240^. When we shut it down, Ryan was immediately alarmed by a strange sound from underhood. "What's that noise?" Oh, that's just the coolant boiling in the overflow bottle. I grabbed a jug of water and cooled off the radiator itself, then had Ryan start the engine for just 10 seconds to circulate hot coolant out of the engine, and we repeated this process a few times until the temp needle dropped below 220^. Being a brand new engine, I thought the extra precaution was worthwhile.

I'm thinking this old radiator has some crud in it, hindering its effectiveness. When it was empty, I could see a lot of crust on the core tubes. Ryan's thinking he'll just buy a new one rather than trying to clean up this old one (which may be original to the car--it is showing a lot of age).

But we'll deal with that later. For now, Ryan and I were overjoyed. We put miles on the car! We actually went cruising in the Cruiser! So much more fun is in store.
Last edited: Nov 25, 2020

Those decals are MINT.

What a fun process and a great time with a couple friends.

We went to start it the other day just so we could let it heat up, but that old carb kept giving us fits. That really needs to be addressed before we can properly deal with the overheating issue.

BTW: despite the fact that it has an identical engine and is using the exact same cat-back exhaust system, the wagon is a lot louder than my Grand Prix. I'm jealous.

Mike's shed huh? Sounds like a gold mine. Think he'll mind if I come over and go through it? I lost a tooth when I was six that I still haven't been able to find.

So any updates on this cruiser?

Since my last update, Ryan has purchased two new items for the car.

#1: a new Summit brand carburetor. This one has a working choke, which is nice. It seems to have overcome the issues we had with Mike's old one.

#2: a new radiator. He bought a 3-row brass drop-in replacement, which should be sufficient for his needs. The old one looked a bit plugged up, so we're hoping this cures the overheat issue.

After installing both of the above, Ryan went on a short two-part joyride. For part one, I was riding shotgun. Everything went fine. I jumped out and someone else took my seat for part two. Halfway through that ride, the car suddenly died and would not refire. It cranks but there is no combustion. We pushed it home. In Mike's yard, we discovered there is no spark. We traced the issue back to the distributor itself--there is power and ground going in to the distributor, but nothing coming out of it. We swapped the coil (in the cap) with a known good one, but nothing changed. We now figure the little ignition control module in the bottom of the distributor is to blame. Our plan is to pull the entire HEI distributior from Mike's Corvette and swap it into the wagon to see if that fixes it. We just haven't made time to do that.[/B]
You must log in or register to reply here.
Share:
Facebook Twitter Reddit Pinterest Email Share Link
Top