SOMEWHERE ALONG THE WASATCH FRONT, Utah — The next time you’re hiking along the Wasatch Front between Ogden and Santaquin with friends, by yourself or even with your dog, be on the lookout for a treasure chest.

Only Maxim and David Cline know where the treasure chest is, because they hid it.

“I’m a little bit crazy,” said Maxim with a laugh. “I think in the first video, I said, ‘Hey everyone, don’t tell my wife about this.'”

She may know, though, because these friends posted a poem full of clues to their Instagram pages this past weekend that leads to the treasure.

Almost right away, scalawags everywhere started looking for it.

“The response last year was insane,” said Cline. “We kind of joked on the way down, after burying it, you know what, in a couple of months we might have to come back up here and dig it up ourselves because no one might care, you know?”

However, that treasure was found in four days.

“He made quick work of our poem last year,” said Maxim.

So, this year they wanted to make it a little tougher.

“We don’t want to make it as easy as last time because, again, we just underestimated the genius of people,” Cline said.

The reason they’re doing it? They’re sick of so much division in negativity in the world.

“It is a treat to watch families who send us pictures or videos and it’s like a family in a van and all the kids have headlamps on and they’re all so stoked to get in the mountains because they think they have it solved,” Cline said.

While $10,000 is nothing to sneeze at, it’s nothing compared to the joy of seeing a kid smile.

“I got a message from a single mom who’s got three boys,” said Maxim. “She said this is the first afternoon where they didn’t want to play Xbox all day long.”

Maxim and Cline had children in mind when they hid the treasure chest.

They say it’s not a mission impossible, it’s not in a dangerous area, and it’s not dangerous to get to where it’s hidden.

“A 10-year-old could do it,” said Maxim. “We did it in our flip-flops. You don’t need carabiners or ropes or anything like that.”

“If anyone feels like it’s getting a little bit dangerous, we say it’s probably not there,” said Cline.

For all those saying it’s not legit or they must have a catch, here’s what they say.

"There’s something about a treasure hunt that I just love,” said Cline. “It brings out the kid in all of us.”

The two men said they will update their Instagram pages with more clues as time goes by.

Here are the links to John Maxim’s and David Cline’s pages, including the poem with clues and map boundaries to where it’s hidden.

Had to find the poem and clues....

Greg said:
Had to find the poem and clues....
Click to expand...

Thank you for posting that picture. I wanted to post it, but on this iPad it's a royal pain in the arse.

Bear made of stone?! It’s near ol’ Ephraim’s grave I just know it

I had the same thought. Go get it!

Majestic slopes seems like a reference to up big cottonwood, and you could see the salty sea from there.
There is also a little lodge where hikers "rest"

That is outside the area where the organizers said it was hidden. Here is the map they provided.

This is the latest clue that was released yesterday to people that subscribe and was or will be released today to the general public.

The buried real cash? It's probably gonna vanish in a wildfire.

mbryson said:
"black bird clicks....." where's that up there?
Click to expand...

Tunnel of green, and reaching end come up short makes me think of millcreek, GWT turns north at the top not sure on black bird or bear reference though

I am thinking 'not alone' and 'bear made out of stone' is an old cemetery somewhere. Bear on a headstone, or similar.

black bird clicks... maybe a mechanical device like a clock...

Treasure was found in Heughs Canyon. Out of curiosity, I’m hoping to find an explanation of how the clues applied. 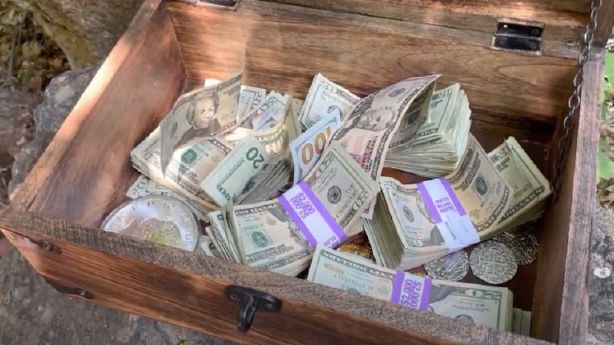 The $10,000 treasure hidden somewhere along the Wasatch Front has been found.