One of my favorite things about Easter Jeep Safari is the concept Jeeps... seems like they throw out some pretty amazing builds and some of the small details usually trickle down to production Jeeps eventually. I had a chance to walk around and see the concepts and admire what the Jeep Concept team had put together for this years Easter Jeep Safari and was not disappointed!

First off, the Jeep Wagoneer Roadtrip. This looks like a restored Wagoneer but it's hiding plenty of updates... from the modern, fuel injected 5.7L Hemi under the hood, to the 4 link suspension and coilovers underneath the body, this thing is a sleeper and it's clean!

Next up, the Jeep Sandstorm... this was my favorite. It's Jeep's take on a Baja-racer... it started as a 4 door JL, but the body has been altered to look more like a truck and the wheelbase has been stretched for better high-speed satbility in the dirt. From the King coilover and bypass shocks, to the rear trailing arm suspension, 40" BFG tires and massive 6.4L Hemi V8, the Sandstorm is build for offroad racing in mind, but still capable of street duty. 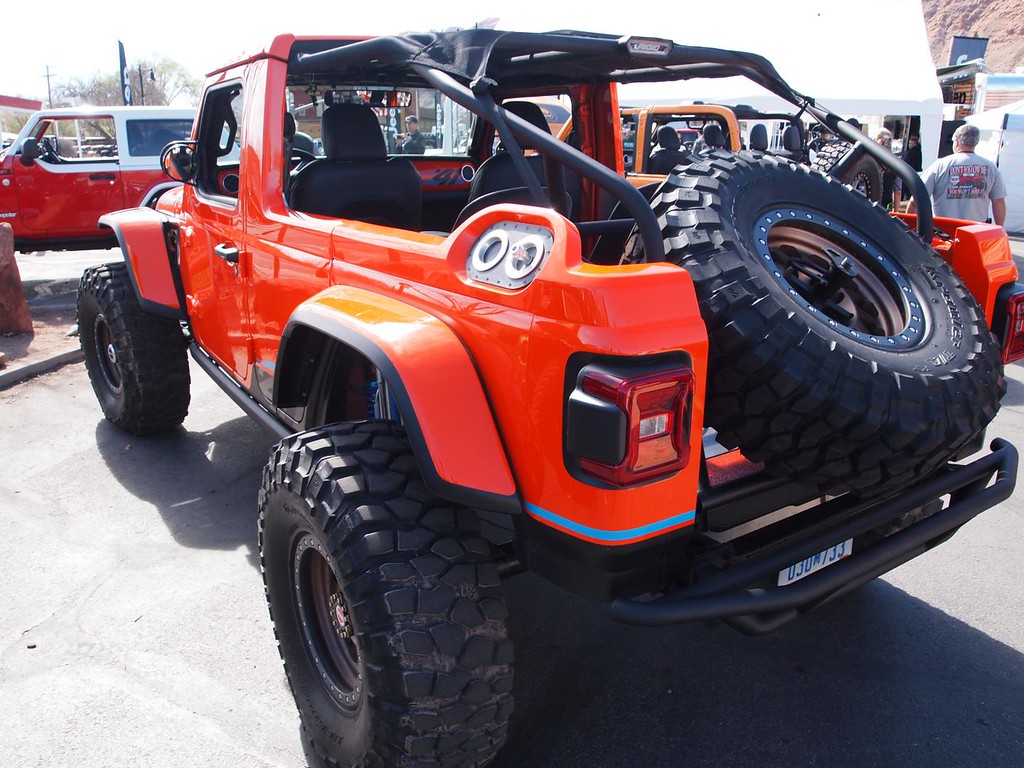 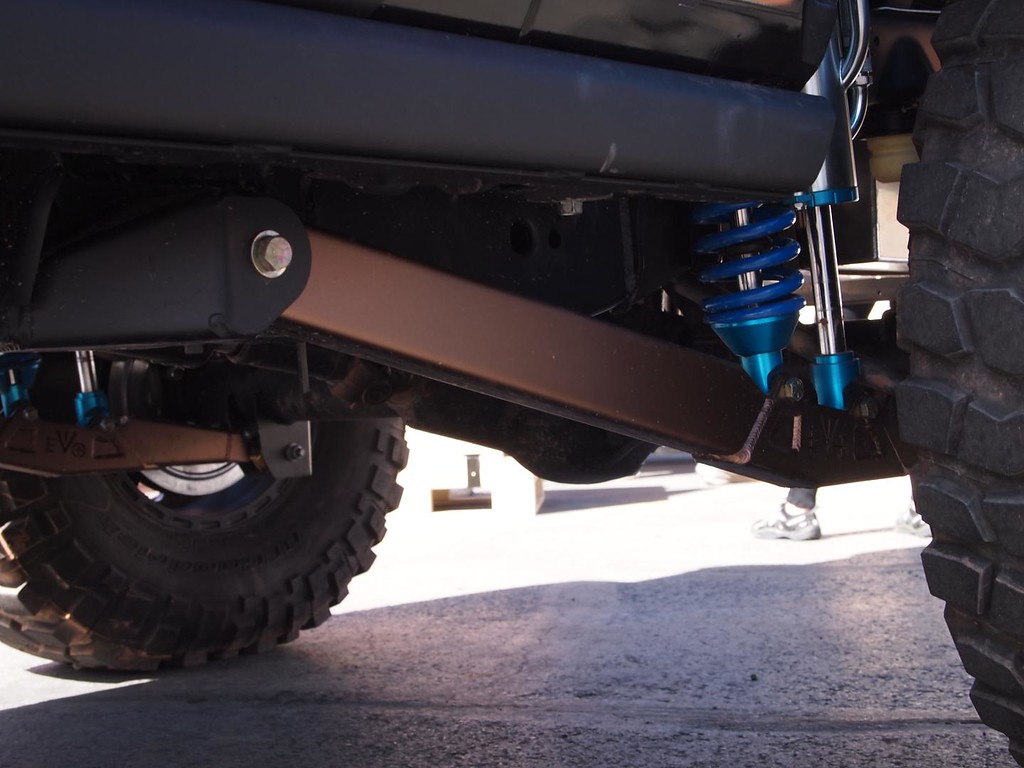 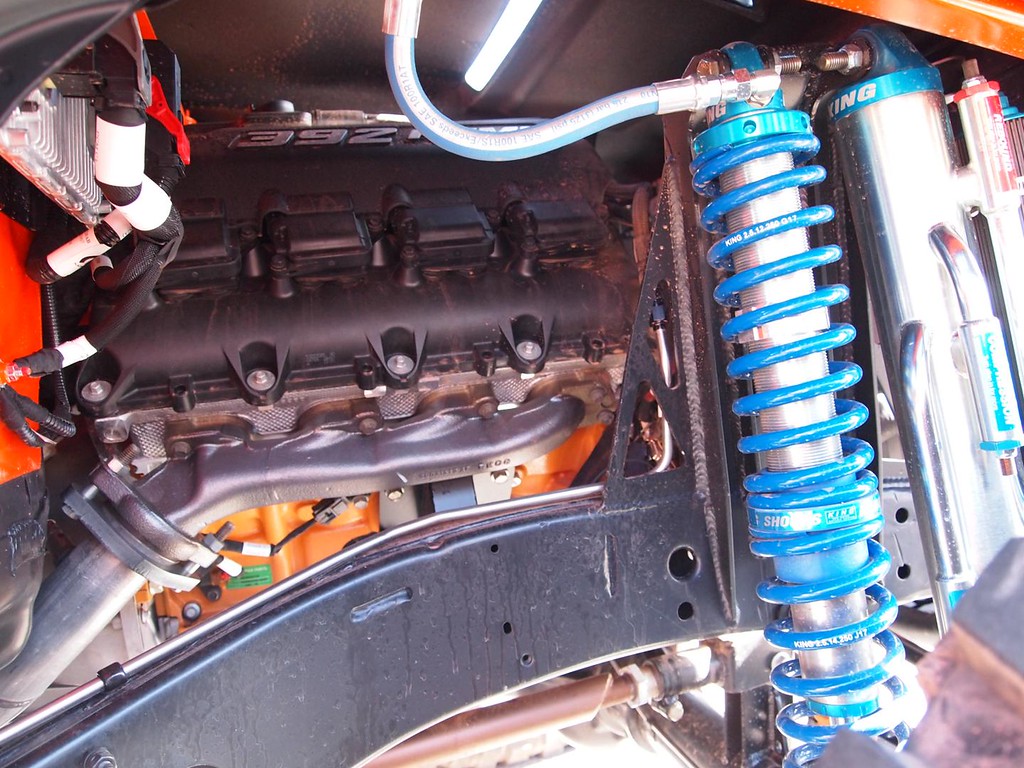 Jeep also built what they call the '4 Speed', a light weight JL that has carbon fiber fenders, hood and rear tub. The weight loss came in close to 1,000 pounds, which resulted in the JL sitting 2" higher on the stock springs! The 4 Speed has the yet-to-be released 2.0 4 Cyl Turbo engine under the hood and is mated to the 8 speed automatic. 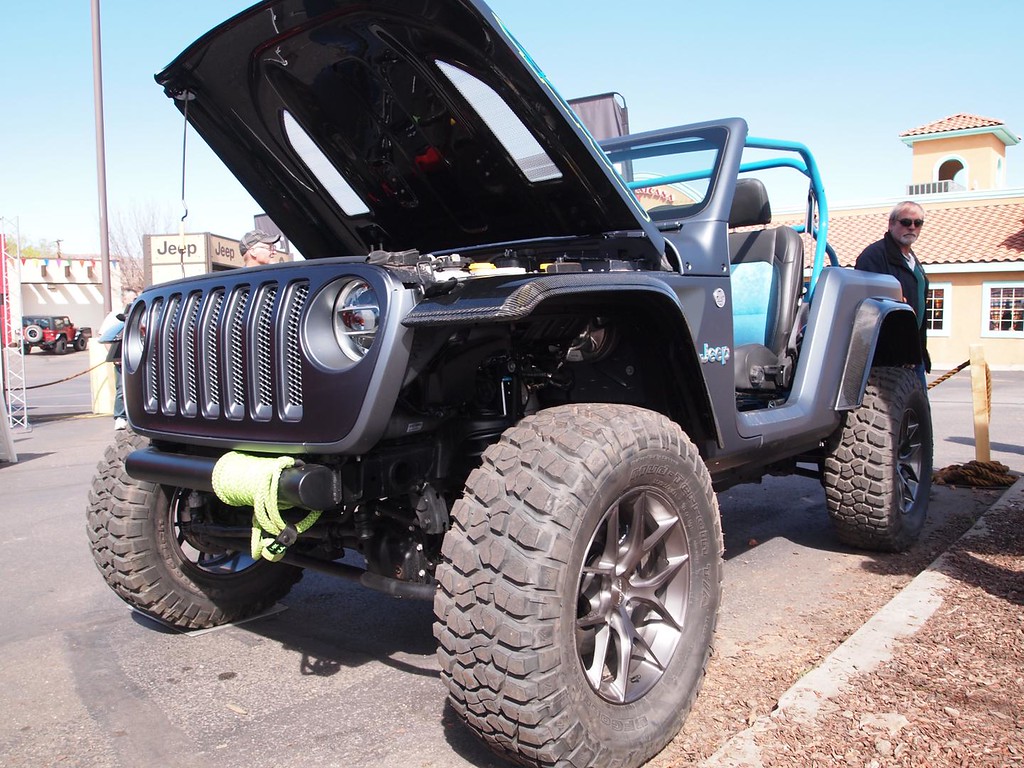 Jeep also brought out the Jeepster concept, the windshield is laid back even further than a stock JL and the hardtop was shortened 2", making for a more compact look and is similar to the style of a 1966 Jeepster. They fit 37's with a 2" lift and combined Red and White to make it stand out from the crowd! 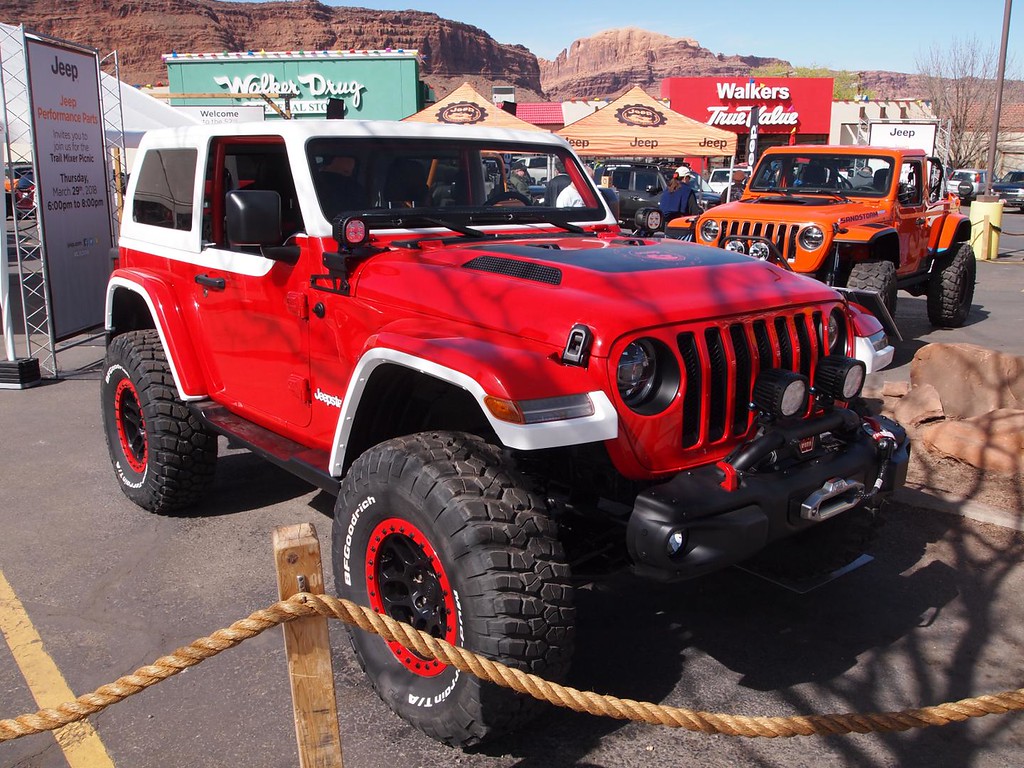 And last, there was the Nacho Jeep... this is basically a 2018 JL Wrangler Rubicon, showing what you can build with official Mopar accessories. The Nacho has the 2.0 4 Cyl Turbo engine under the hood, a 2" lift and 37" tires. There are many other Mopar parts added to the Nacho, like beadlock wheels, Warn winch, brush guard and offroad lights. 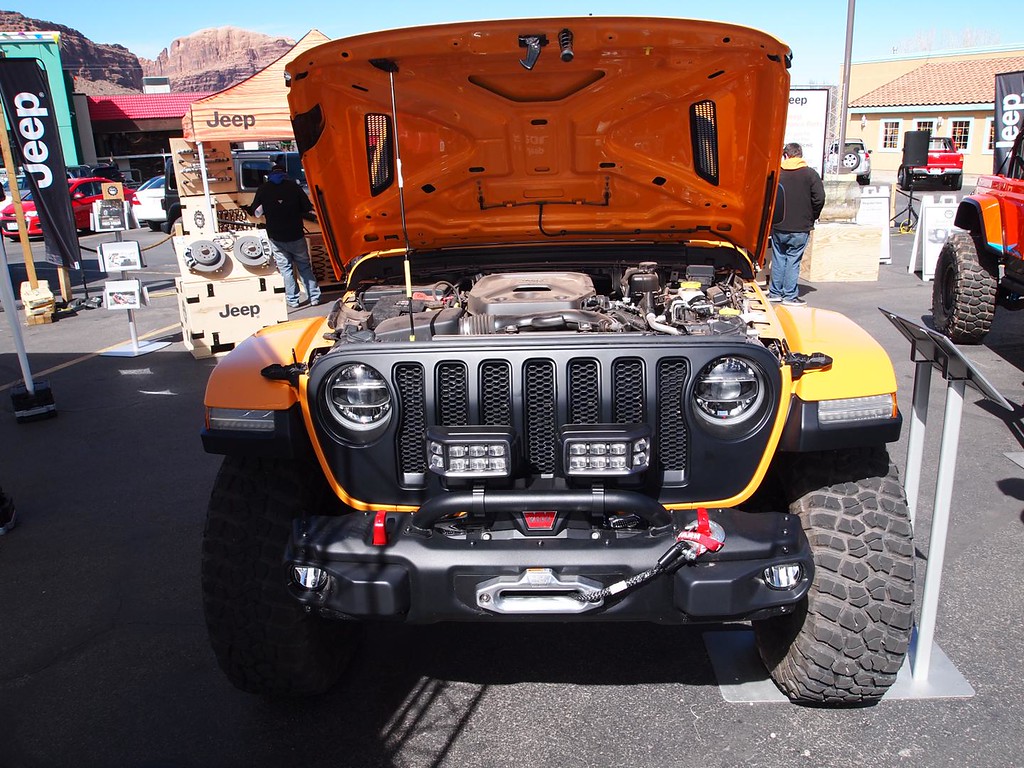 Another note-worthy Jeep that was parked outside the show area was this JL with a "J-wagon" badge.... no real info on it, but you can see it has a snorkel, roof rack and beefier rock sliders. I thought it was pretty interesting! 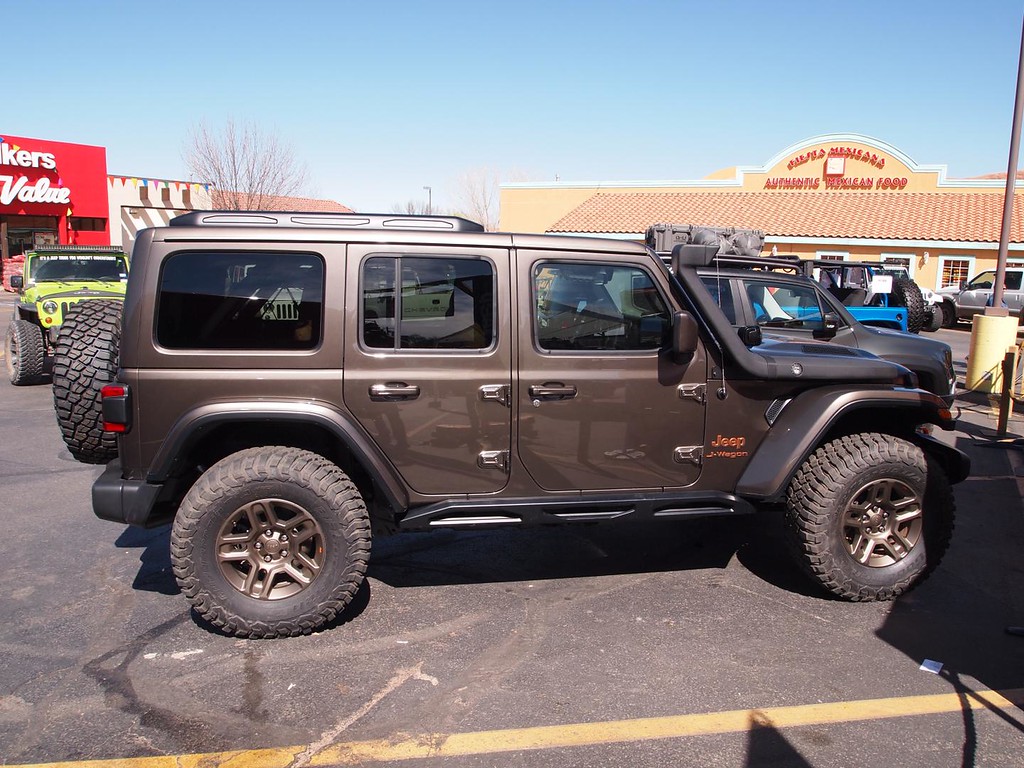 There were a couple note-worthy Jeeps in the parking lot while I was there, I'm sure these belonged to people walking around the Concept Jeeps but I had to take some pics...

The 4 speed was also shortened like 22” or something awesome. I like that one the most personally- it has some really cool touches in person.

The Wagoneer and the Jeepster are great.

xj_nate said:
The 4 speed was also shortened like 22” or something awesome. I like that one the most personally- it has some really cool touches in person.
Click to expand...

The 4 speed was also my favorite, though I didn't care for the roll bar design. I would like to see a lightweight stripped down Wrangler in the showroom at dealers. I would also love to see my own Jeep 1,000 lbs lighter.

The Wagoneer is sweet.

That Waggy is amazing.

Am I the rare guy not excited for a turbo 4 cyl in a Jeep? I thought the single V6 was pretty smart re: emissions and testing for certification.
Last edited: Apr 8, 2018

mbryson said:
Am I the rare guy not excited for a turbo 4 cal in a Jeep? I thought the single V6 was pretty smart re: emissions and testing for certification.
Click to expand...

My attitude with this motor is to wait and see how it plays out. I certainly wouldn't buy one until it's been proven in the field for a few years.

mbryson said:
Am I the rare guy not excited for a turbo 4 cal in a Jeep? I thought the single V6 was pretty smart re: emissions and testing for certification.
Click to expand...

I'm pretty interested in it, actually. Not sure I'd buy one myself, but the late model gas turbo engines are pretty damn impressive, IMO. Variable vane turbos make boost come on early and pull hard thru the RPM range, turbo engines are built with with much higher quality parts (forged pistons, cranks, etc) and so much more.

My DD is a Jetta with a 1.8l gas turbo engine.... boost comes on very low and it pulls pretty hard for stock. Adding a simple tune adds a substantial amount of power and the engine is still plenty capable of handling more.
You must log in or register to reply here.
Share:
Facebook Twitter Reddit Pinterest Email Share Link
Top