We had our monthly RME trip to Western Colorado, running 21 Road on Saturday and Billings Canyon on Sunday. We had a pretty large group on Saturday, 14 rigs if I counted right. Most were RME members, several of the Moab Friends For Wheelin' came over the border to join us. I'd try to name everyone, but I know I'll probably miss a few... ... so I'll tag the RME members I know were there. @Pile of parts , @Jinx , @drtsqrl , @DToy @pkrfctr , @roktoy , @otrees , @LSdLJ

We unloaded at the trail head and found Jeff and Janie Bates ( @Badbuggy ) out there, repairing the kiosk for the trail. Some idiot had shot up the informational kiosk and and they were repairing the damage.

Realizing we had a long trail ahead, we decided to drive the access road up the bottom 1/3 of the canyon. The trail gets more and more challenging as you work your way up towards the top and that's what most in the group were looking forward to. I did my best to get pics of everyone, but the group was spread pretty far apart and didn't get photos of everyone on the way up the canyon.

Around 11:00 we had to make it to an optional obstacle called High Dive... it's a long, gnarly drop that pitches you sideways as you come over it. Several in our group tried it, with Melissa F. being the first test subject. Jeff, aka @drtsqrl , put on a pretty good show... putting his rig up on 2 front tires for about a second or so. There is a pretty big rock at the bottom that your drivers-front tire hits RIGHT when you want to be rolling out of the drop. If you get hung up there, momentum shoots your rear-end up high!

We took lunch at the Overhang just before Noon. At this point we were making good time.... but the trail really gets challenging from the Overhang on up. There are more optional lines exiting the overhang, but while they look pretty easy, they can be deceiving. 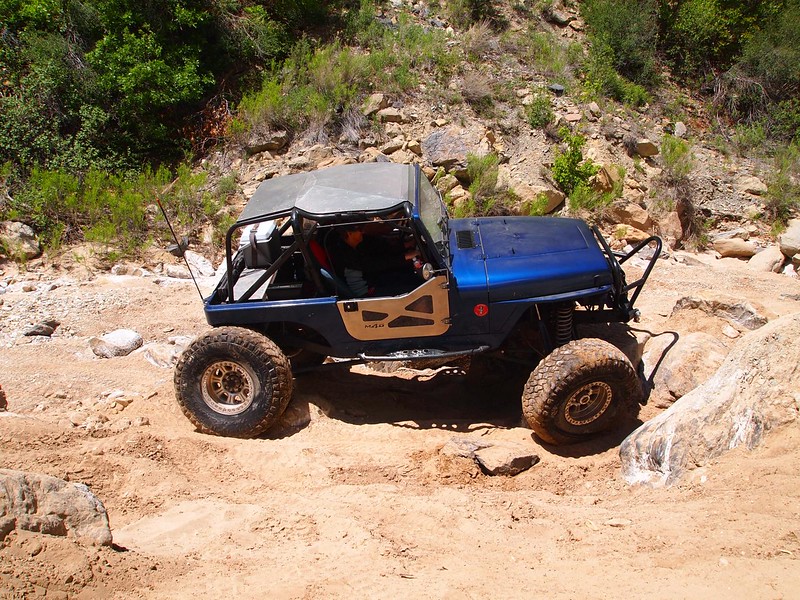 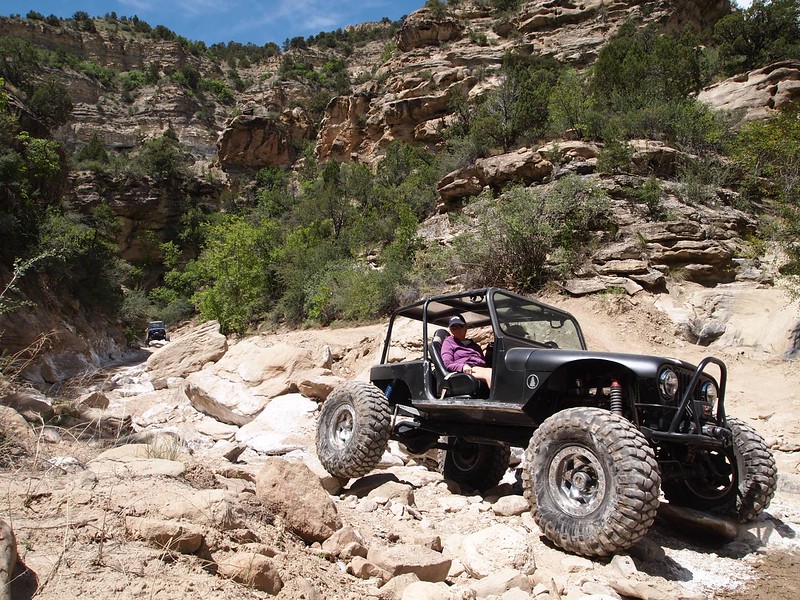 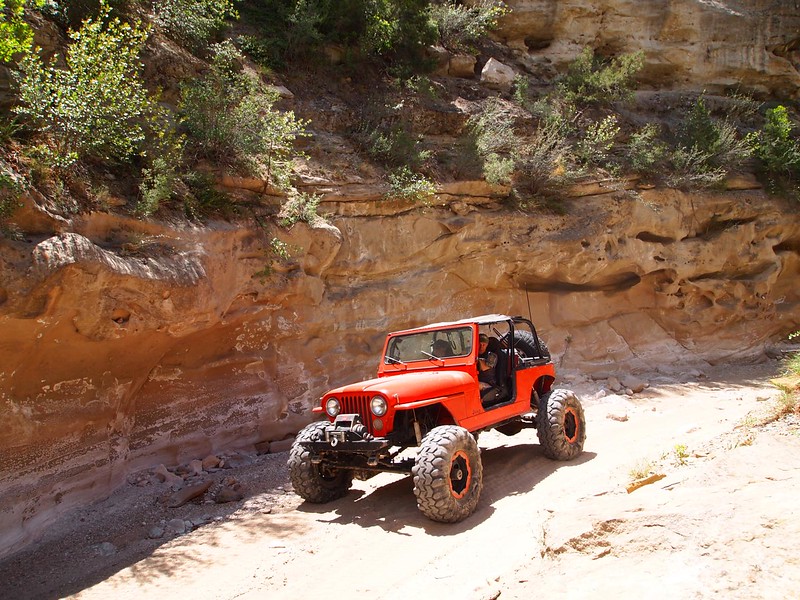 Once we got close to Carnage Corner, our group slowed down a bit as each rig worked it's way over the massive boulders and the multiple lines. 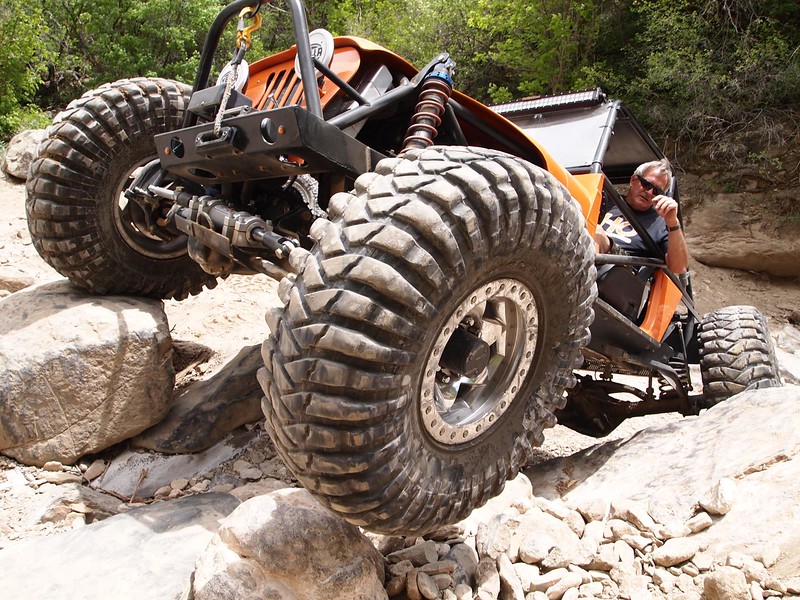 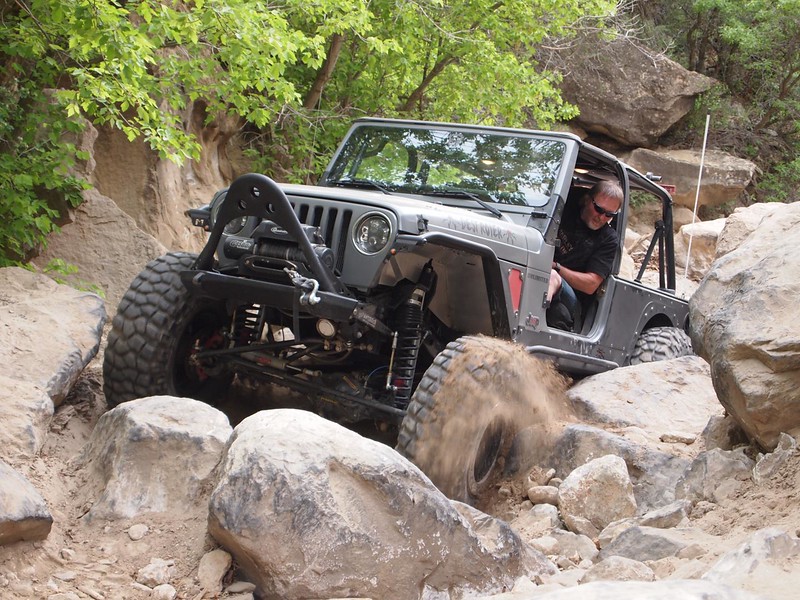 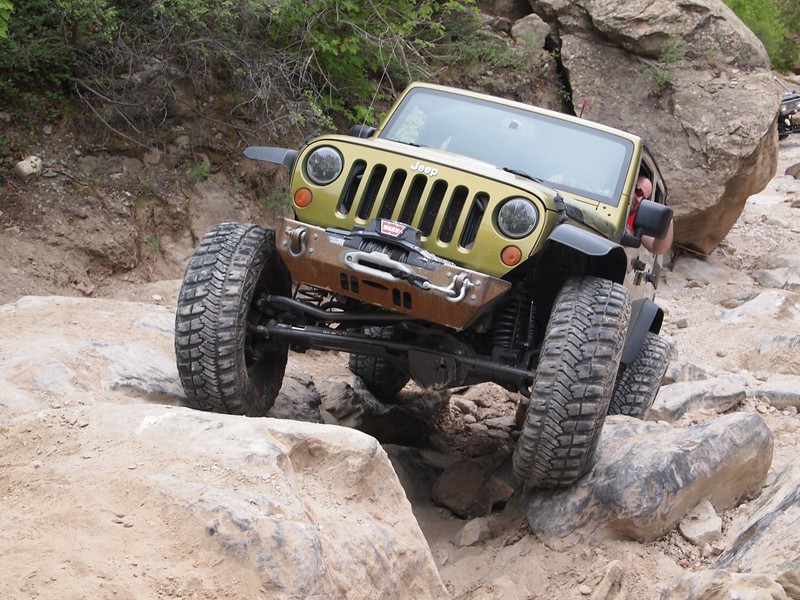 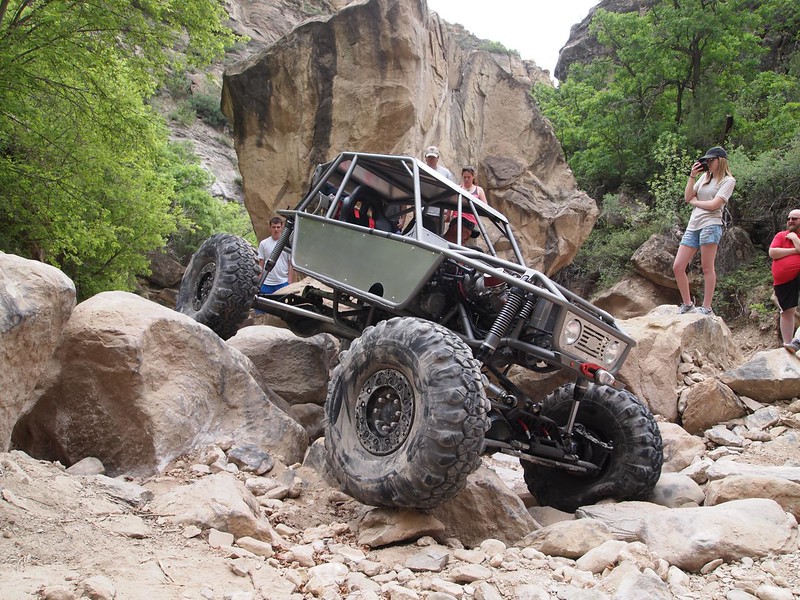 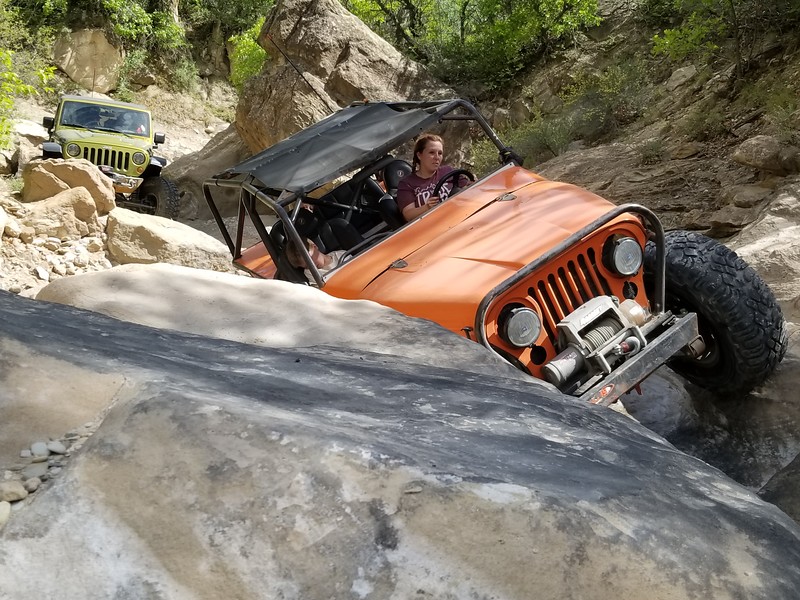 We ended up getting into a bit of a traffic jam as some headed back down the canyon, we ran into another group that needed help, and picked our way thru the last couple challenges. We did have some minor trail fixes and part of the group wanted to drive up and out on the dirt, so we worked our way out of 21 Road from the top. It ended up being a pretty late night for much of the group... but still a great time wheelin' 21 Road!

We didn't really have any major carnage, which is impressive for a group of this size! Everyone knew their rigs, how capable they were and that they were reliable when pushed hard.

The Billings Canyon run on Sunday turned out to be quite clusterf00k... there was a huge mountain bike race going on in the area and there was more traffic than I'd ever seen up there. This made parking a PITA with trailers and the surrounding roads and trail were busy. On top of that, the rock crawling trails where quite busy as well. Out group was split up due to the messs. Eventually we unloaded, made out way to the trail head in smaller groups with other rigs spread out thru the mix.

About 1/3 of the way into the trail one of the rigs had the alternator fail. We decided the best bet was to charge the battery and head back out the bottom of the trail. We took lunch and let the battery charge, then made our way out the bottom and back to the tow rigs. It was just one of those failures that you can't plan for, so we made the best of it.

Once back to the tow rigs, the crowds had cleared out and it was much quieter. Soon other members of our group make it thru the trail and back to the tow rigs, so we loaded up and called it a successful weekend! Sounds like we're already making plans to get revenge on Billings later this year!
Last edited: May 21, 2018

Ok, I'm in for the September run. Every time I see reports of these trails I ask myself why I missed out.

Great to see you guys, next time I will have to come with!

Crap! So I was already bummed that I had to miss this trip, but now I'm just pissed. Looks like an awesome time! Definitely jealous.

Herzog said:
Ok, I'm in for the September run. Every time I see reports of these trails I ask myself why I missed out.

I ask myself why you're missing out, too.... Sept should be a good time to make another trip!


Badbuggy said:
Great to see you guys, next time I will have to come with!
Click to expand...

Good seeing you out there, Jeff! We'll have to plan the next one when you can make it!

Gawynz said:
Crap! So I was already bummed that I had to miss this trip, but now I'm just pissed. Looks like an awesome time! Definitely jealous.
Click to expand...

It was a great time, you'll have to come to the next 21 Road/Billings trip!

There is another new trail right close to Billings, called The Cutoff. I need to put my eyes on it, I hear it's short (300 yrds) but a huge challenge.

of course these pics made the report

pkrfctr said:
... of course these pics made the report
Click to expand...

They were from about the only "recovery" opportunity of the weekend!

when in doubt, upgrade!

Love the pics of the kids sleeping in the buggy ON the obstacle!

Great write-up and pics, Greg! Thanks for putting this together... wish I could have made Billings too!

oh man that looks like fun. really need to work out getting down there for the next one.

Jinx said:
Love the pics of the kids sleeping in the buggy ON the obstacle!
Click to expand...

Yeah, that was too funny! 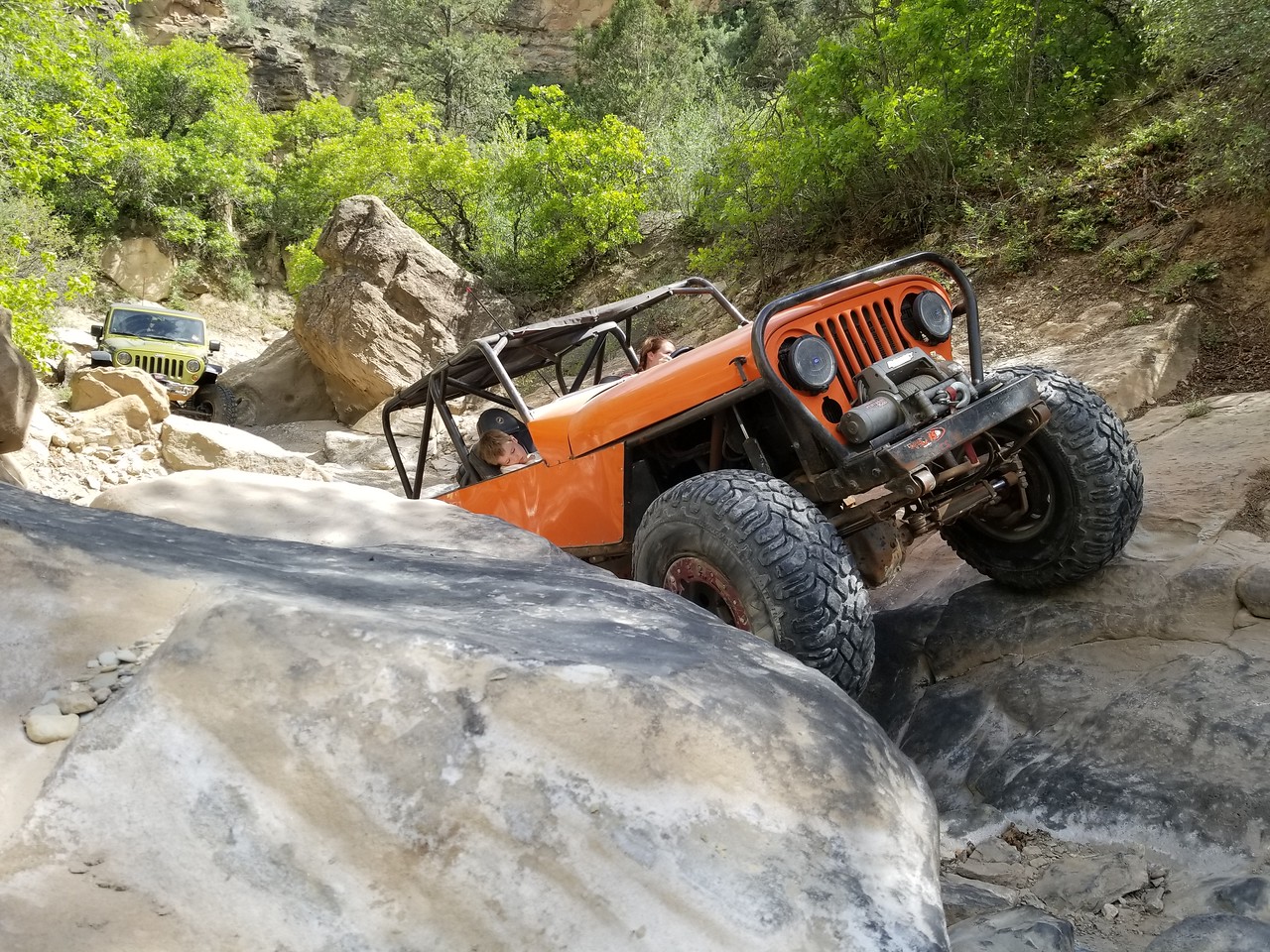 drtsqrl said:
Great write-up and pics, Greg! Thanks for putting this together... wish I could have made Billings too!
Click to expand...

It was great to spent time on the trail with you and your group again, glad you all made it out! I don't think you missed too much on Billings, it was such a mess with the mtn bike race going on!

RockChucker said:
oh man that looks like fun. really need to work out getting down there for the next one.
Click to expand...

I don't know, not sure you'd like it... there are massive rocks everywhere, all kinds of different lines/options and it seems the challenges will never end!

Some vids of High Dive, courtesy of Sharry Roundtree-

Looks like a great trip. Really bummed I missed out this time.
C

Great people, Great run! We had a blast. I don't have a ton of pics. My wife was on camera duty so the pics are all of Jinx' kids and my kids. Huge thanks to Greg for showing us around. I don't know many, if any, guys who would agree to lead a run that they didn't drive. So thank you Greg! I need to get back there to run Billings. I was in the group that turned around to get the dead rig out.