General Tech What did you work on Today?

Ever since I bought my truck, I've always wanted a center seat instead of the console. I liked the console but there's something nice about having your girl sit right next to you

So I picked up a center seat, had the car wash place go to town detailing it (it was pretty dirty), and got to work.

First, both seats have to be unbolted. Then the center console removed. (Make sure you vacuum under the seats because you'll never have them out it again...)

bolt the center seat down in the rear (the front mounts are shared with the driver and passenger side seats).

I ran into a small issue that I didn't quite think through... armrests. Bench seat trucks don't come with them.

So out came both seats again and I unbolted the armrests and back in they went... and out they came again... limit studs.

First you unclip the upholstery and roll it up.

Second, pull the foam out of the way.

Third, get a grinding shield to keep the sparks from lighting everything on fire and cut off the studs

(note, bench seat owners who want to swap in a center console only have to add the limit studs to keep the armrests from rotating all the way back. This is fairly easy as the holes are already there, just add a bolt for a stud and a small tack weld to hold them in place.)

Fourth, put the seat cover back on.

Fifth, bolt the seats back in and wal-la bench seating for 6.

Took a couple hours fumbling in the dark because my truck doesn't fit in the garage with my hover Jeep, but I'm happy.

No mods here, but I did score a replacement drivers seat for $25. Completely intact, minimal wear, and doesn't have a busted bolt on one side that makes it twist when you lean back. I'm happy.

I did the same thing to my 99 S.D. and I love it. I do not often need seating for six but it sure has been nice when I did and the new seat/console is more comfy than the old arm rests. I just put a cutoff wheel on the stud on the seat so my hack saw would not ruin the seat cover but your way is better that steel is harder than the gates of hell. took forever to cut them with the hack saw.

No longer on a beach

Getting ready for my project tonight: new shelves in the garage. 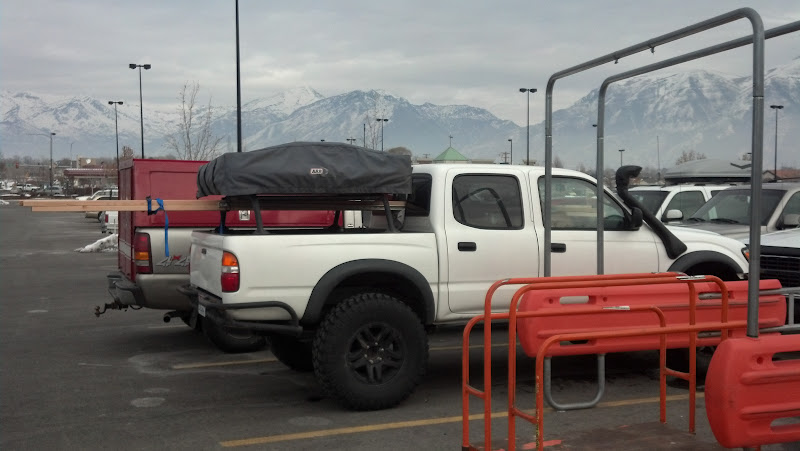 Not a "min" project in my mind, the jackass that plumbed our house decided to try to make the sewer line go up hill. So yeah about 25 ft of sewer line had to be re-sloped (re-placed) I had to make 5 holes in the basement floor, the bathroom is more hole than floor now. You know what sucks worse than concrete dust? concrete dust in your house!

At least I am working inside right? And we "get to" re-model the down stairs bathroom (you know the bathroom that only gets used when company stays with us... )

BTW Stratton you should have looked harder for an 02+ console it has cup holders in it so you don't have to use the cup launchers in the dash. (and I would have sold you a center console seat from a 00 if I knew you were looking for one it is even beige, although cloth is different actually from an 02, the cloth swaps from the 00 to the 02 style and I kept my cloth.)

(not my truck I found this on the internet, I guess I don't have a picture of mine...)

I didn't take any pics, although I thought about it, but I started taking apart a winch that looks like it has spent more time under water then above it. I don't know if I can save the rusted out gears. We'll see.

thenag said:
BTW Stratton you should have looked harder for an 02+ console it has cup holders in it so you don't have to use the cup launchers in the dash. (and I would have sold you a center console seat from a 00 if I knew you were looking for one it is even beige, although cloth is different actually from an 02, the cloth swaps from the 00 to the 02 style and I kept my cloth.)

I've been looking for 6 months to find one that matched my interior and wasn't nasty or ruined.
That does look nice. I haven't (as of yet) had a problem launching cups from the dash cup holder though. I kinda like the extra space in the earlier seat. I know I will miss the tons of storage my center console had (I bet I could fit 3 or 4-1 gallon jugs in there.

No longer on a beach

Maybe an extra shelf will help me keep my garage organized... probably not. I'm obviously not a carpenter, but once I support it from the ceiling with Unistrut it should be strong enough for camping gear. 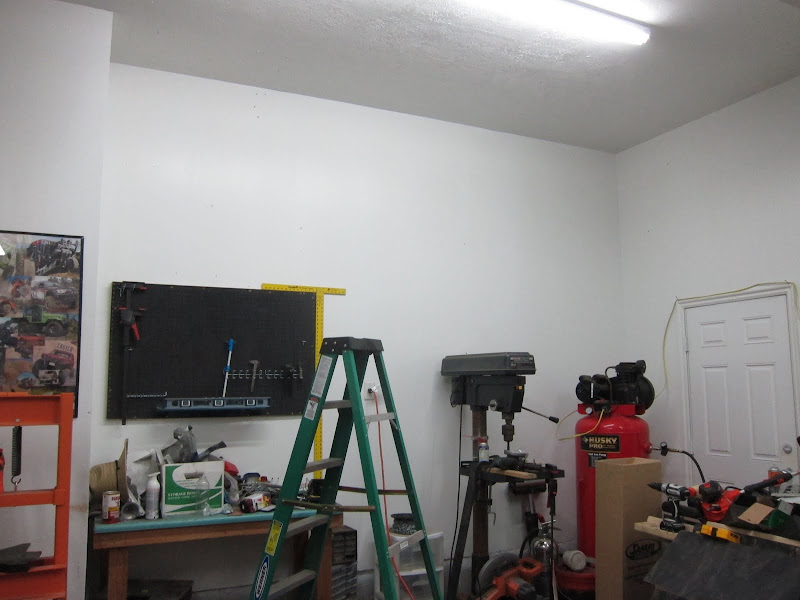 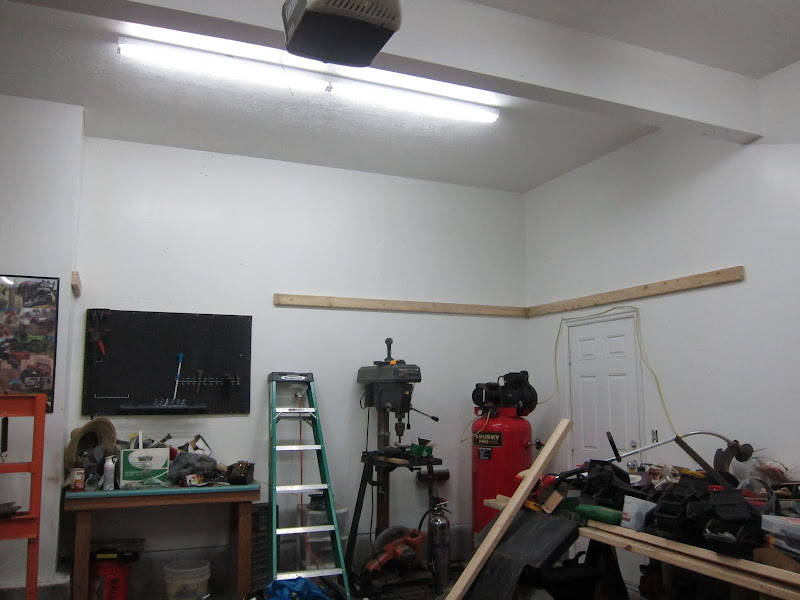 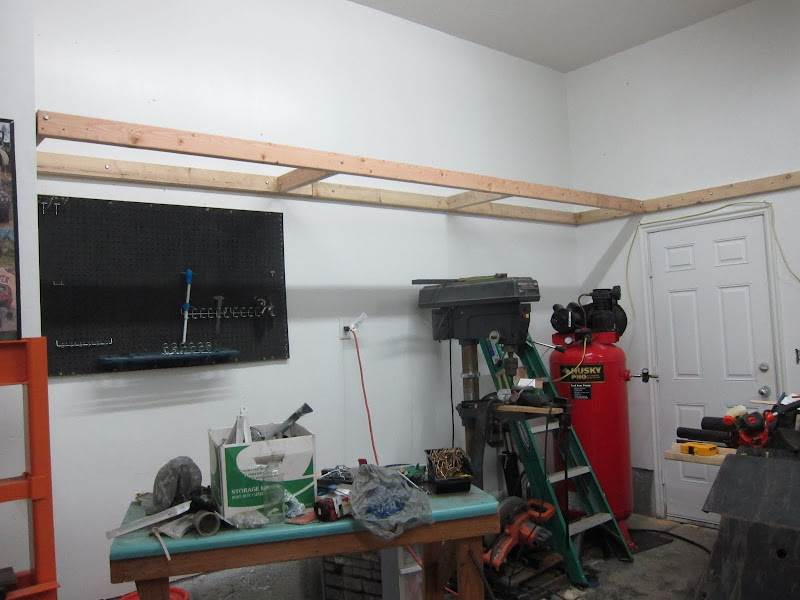 Now I just need to design a pipe rack to hold extra 2x4's and tubing.

Hey UFAB, i worked on that bike for you once upon a time. I think i installed that crankbrothers headset.

Today i worked on my ignition problem. No spark. Replaced 2 parts, still no spark!

My BIL is a manufacturing engineer who specializes in carbon fiber. He worked for the company who builds those frames. It is pretty cool technology.

Used to be Delta 7 and now they are Open air composites..

They are a few doors down from my shop.
L

Gosh, i guess i should have read this yesterday. Anyways, yesterday i installed a new stage 2 cold air intake on betty. Today i changed the oil and filters on betty and on the escape. 5W20 royal purple in both of em.

Trying to figure out the dash.

benjy said:
Trying to figure out the dash.

It seems like the light you have mounted on the hood would light up the trail better if it was facing forward.

Removed this small dent from my gas tank skid.